If you’re anything like me, you’ll see an actress on TV, or an innocent woman on the street, and just instantly know she’s someone you’d love to personally have in merciless peril. I’m curious WHO that is for you, and why (past or present)...

An example. I watch very little TV, but SEAL Team on CBS is a rare exception. Jessica Pare (yet ANOTHER hot Canadian) plays Amanda Ellis, the Team’s CIA analyst. She just screams to be kidnapped, gagged and interrogated. For me, it’s about her sultry look and mannerisms, tall and slim, always wearing tight, suggestive clothing - and her character is that of a tough, haughty CIA operative who has held her own on a few episodes - though unfortunately never captured except for once, in Afghanistan, in a lame scene that could have been so much more.

“Agent Ellis” should receive a Floor13 treatment - heavy, horrific torture - to make her divulge CIA secrets. I want to see this tough bitch get broken, and tears streaming down her hot cheeks as she begs for relief.

When the character is already dressed for the role and plays the part of tough soldier that would definitely be defiant and take a hard punishment, I can't help but get ideas about it.

Personally, I'd love to see this girl ride a metal bed through a hard electro-interrogation. Athletic types like her would pour sweat for hours, showing off her incredible muscle definition each time her body goes rigid from a shock. 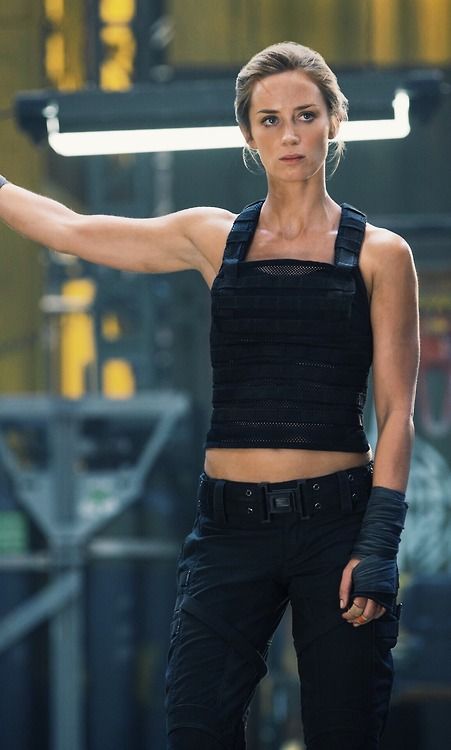 Oh, hell yes, great choice - Emily Blunt, in Sicario, as an FBI Agent. I love the phrase “ride a metal bed through a hard electro-interrogation.” That’s almost poetic in my sick mind. I love her tight, hard body and already-pissed off look. When a woman like this eventually breaks, the payoff is so much better.
Top

Emily, before she’s chained to the metal bed... Those toned arms are hot, sweetheart, but they just mean that you’ll buck harder and provide us more delightful clanking sounds to go with your muffled shrieks.

If I were allowed to use the way-back machine and bring one into the present, it would, without a doubt be Jane Fonda. But that would be strictly a personal matter. So my more up-to-date choice would be Margot Robbie. I can visualize a great deal of satisfaction taking that "I'm in control" look off her face, and seeing some tears in those eyes.

Gimp fact of life #1; No matter how bad it is, it can and will, get worse.
Top

Great choice! Here’s a clip, and a manip!

Oh yes indeed. Nice job. And thanks for that clip. I think I need to watch more movies.

Gimp fact of life #1; No matter how bad it is, it can and will, get worse.
Top

Good suggestions so far >:) For mainstream TV/movies I've always loved when the tough athletic heroines get captured for AOH torture. First it was Peta Wilson in La Femme Nikita, then it was Jessica Alba in Dark Angel, and most recently it was Rhona Mitra in Doomsday. Some telenovelas have delivered occasionally, but none of these get as exploitative as I would like. I really want Michelle Rodriguez to have that type of scene before she's no longer physically able to. She's hot and looks feisty...
Top

past models, but Corinne Russell is up there--nice perky breasts, erect nipples, and a great body (concave stomach and rib cage), then Shannon Whirry--I even wrote a story torturing her. Then several 1960's - 1970's Playboy Playmates, but few here would know them by name. Hell, I mainly know them only by their tits. I can identify them even without the faces.
Top

First of all, i must say a lot of girls in the movies could be amazing, but i hate the way a heroine's bravery is managed by writers, as if their pain and hopeless situation were easy things to handle. No fear of death or pain at all.

So my choice is Arwen from Lord of the Rings because I really loved the way she was showed in the movies, brave, strong, but not in an unrealistic way.

When she takes the hobbit to Rivendell, she says to Aragorn: "I don't fear them" (the enemy), but you can see when she's running from the Nazgul, she's actually scared. Even when she's very powerful and defiant, you can see her pretty worried, because she is in a very dangerous situation. She's running from the most evil creatures in the Middle Earth, they are murderers, torturers and their mere presence is enough to inspire fear on all creatures, and you can see that on her eyes, she's brave, but she's pretty scared too. She knows very bad things gonna happen to her if she falls.

I would love to see a tragic ending where she is captured and taken to Mordor to be interrogated, tortured and broken... thank god for fan art and DazStudio.