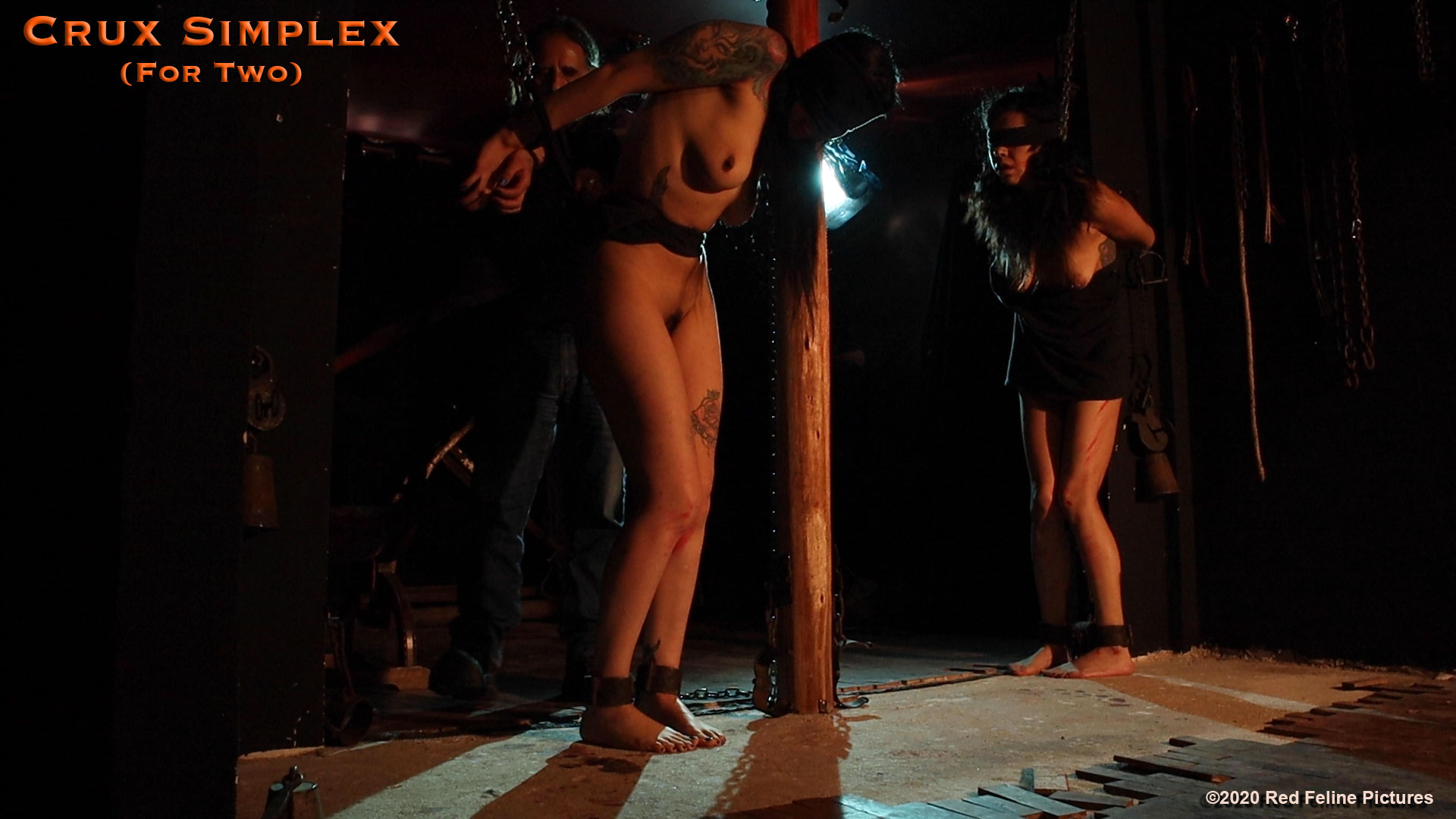 November is moving fast, or it may be that so many things are happening that it makes the passing of time appear to be so short, so extremely short.

The trio from the dungeons of hell is advancing at a maddening speed with the production of Crux Simplex For Two. If I were to describe one of those ferocious and wild afternoons I would have a hard time to be true to the moment. Lots of flogging, whipping, beating, torturing for the two amazing women and in so many situations that it is hard to keep track of everything that is happening to them. And a lot of work, a lot, for the torturer/director/cameraman/gaffer/make up artist/ and more. Even the GoPro camera went flying at one point during one of those dizzying events.

I think that is a totally crazy production schedule, but there it is, it is happening, even under the worse conditions that we, as a planet, ever faced!

Meanwhile, CruXtreme IV is moving rather slowly in its post production. Having three movies in the editing timeline is a bit too much for one person. However, I heard that Mila has completed the first stage of mastering the great post production software Premiere. She might be joining Jac in the editing room to work on the new films; nevertheless, I don't think Jac will let Mila edit CruXtreme IV. He happens to be enjoying the work of cutting the film too much to let anyone else do it, maybe not as much as he enjoyed having Mila to torture for so many days, for so many hours, and seeing his work take shape under his steady fingers is an enjoyable feat on its own. 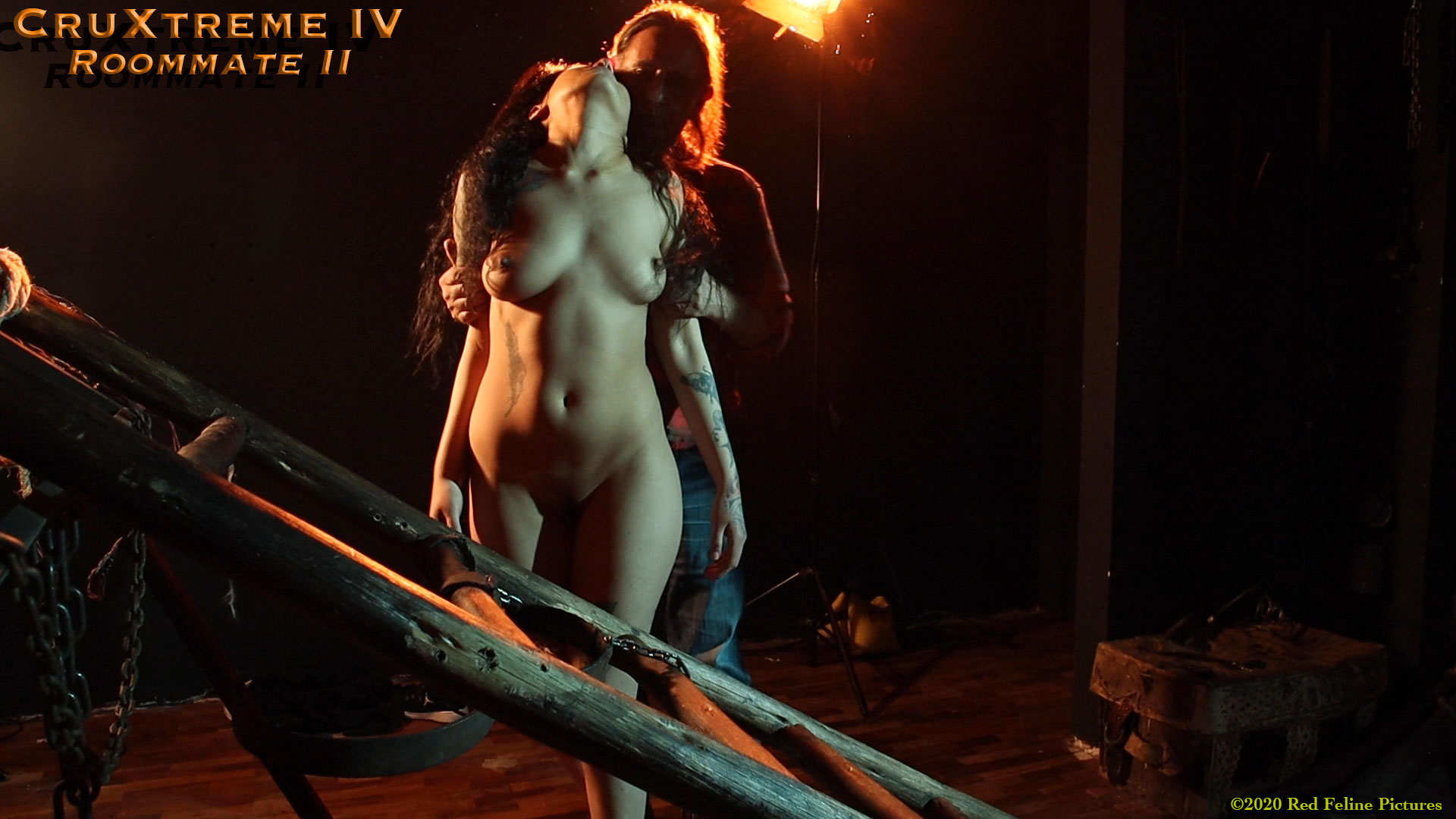 zaniaqwerty Why don't you make a film about how Dani got into making films of torture and execution. I can imagine a full length foreign language film in the same market as Blue is the Warmest Colour. It tells the story of a strong willed young woman who doesn't take shit from anyone , who can take care of herself, who is intelligent. charismatic, charming and protects her friends from their asshole boyfriends, yet she is drawn to act out being a victim of torture and crucifixion. I want to know what makes this character tick. I think some of the dialogue between her and the film maker/ executioner would be good. I imagine her telling him with softly spoken threat about how his balls would be removed if he actually drew real blood from her, showing the audience that despite all the visuals of her suffering the death of a Martyr. Despite the fact that she is acting the part of a victim. she has most of the control in the relationship

There's a movie very much like what you describe, Martyr Or The Death of St Eulalia. The story of Camille, a young French woman visiting New York, as she plays the role of the very famous third century martyr for a photoshoot. One particular element of the movie is that Camille (played by the most fantastic Carmen Paintoux) has the control of her relationships as well as of her suffering. One famous professor/writer gave a lecture at Sienna University, in New York State, about exactly that, the role of Camille in the film and how she controls everything.

If we were to watch the raw footage of Camille/Carmen during her training, there are moments when she does go after Jac because he hit her too hard on her nipples. 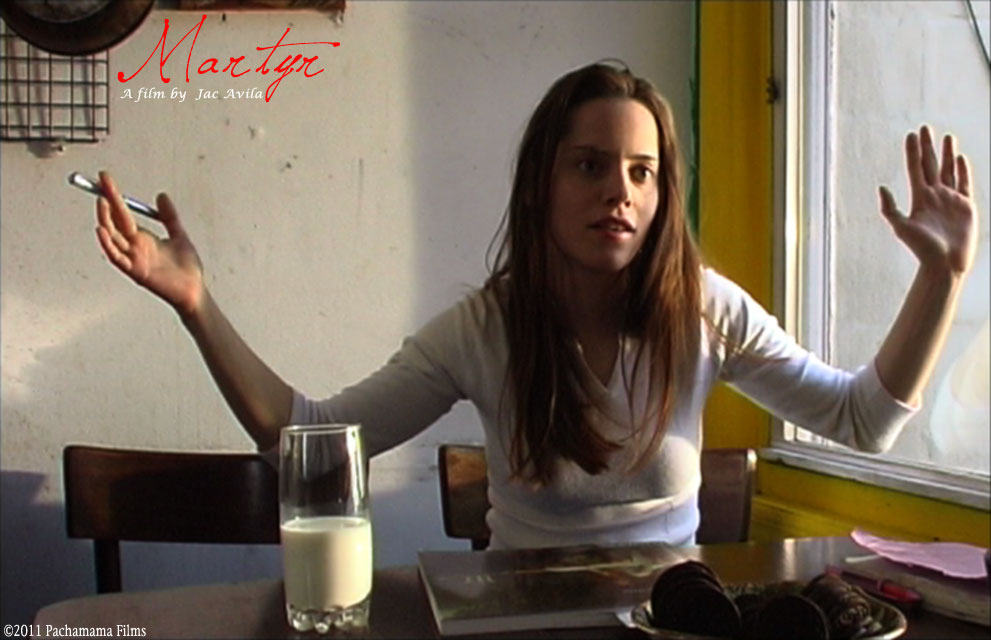 Having said that, Jac is planning another movie with Dani, La Femme De Chambre, where some of the elements described in zaniaqwerty's comment are part of the story. Furthermore, in CruXtreme III - The Callback, Dani goes into the role of a torture victim, willingly, she auditioned for it and now she is responding to a Callback to play the dramatic and most painful role of a woman executed, in extremely nasty ways, for the crime of stabbing a powerful man to death.

If all the footage captured when Dani and Jac were either setting things up, or talking about what they were doing and/or were about to do was edited into a Making of film, we would have a very interesting documentary about how an actress goes into the role of a suffering victim put to extreme torture, the actual pain she suffers, the fainting, the long waits while Jac prepares what he needs to torture her, while she's strung up on the cross, her delicates "resting" on what can only be described as a rusty metallic, rough, Spanish Horse kind of apparatus. 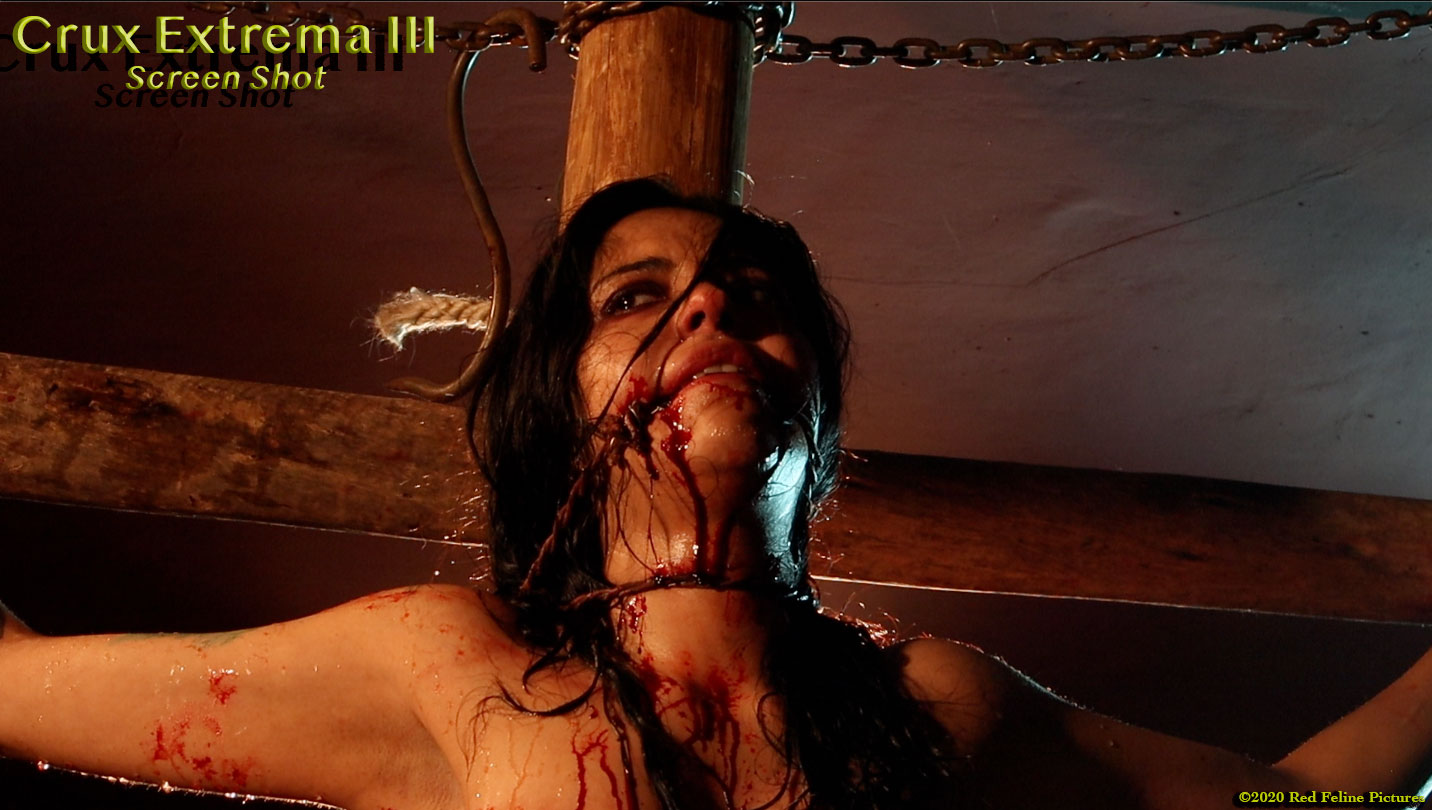 Dani has maximum suffering on the rack in a variety of increasingly painful ways in CruXtreme II - The Roommate. The film took many weeks to shoot and during all that time she had to be on the cruel contraption in many different positions. One particularly painful moment was when she was set up with her arms and legs stretched along the length of the rack, her head leaning off to the side, her legs hanging out, her ankles and wrists tied to the extremes while her body lays across it, her back and ass resting on the rough, uneven, wooden parts of the rustic ladder that plays the role of the rack.

In that position, her legs wide open, Dani is most vulnerable to Jac's cruel mistreatment, which includes the flogger. 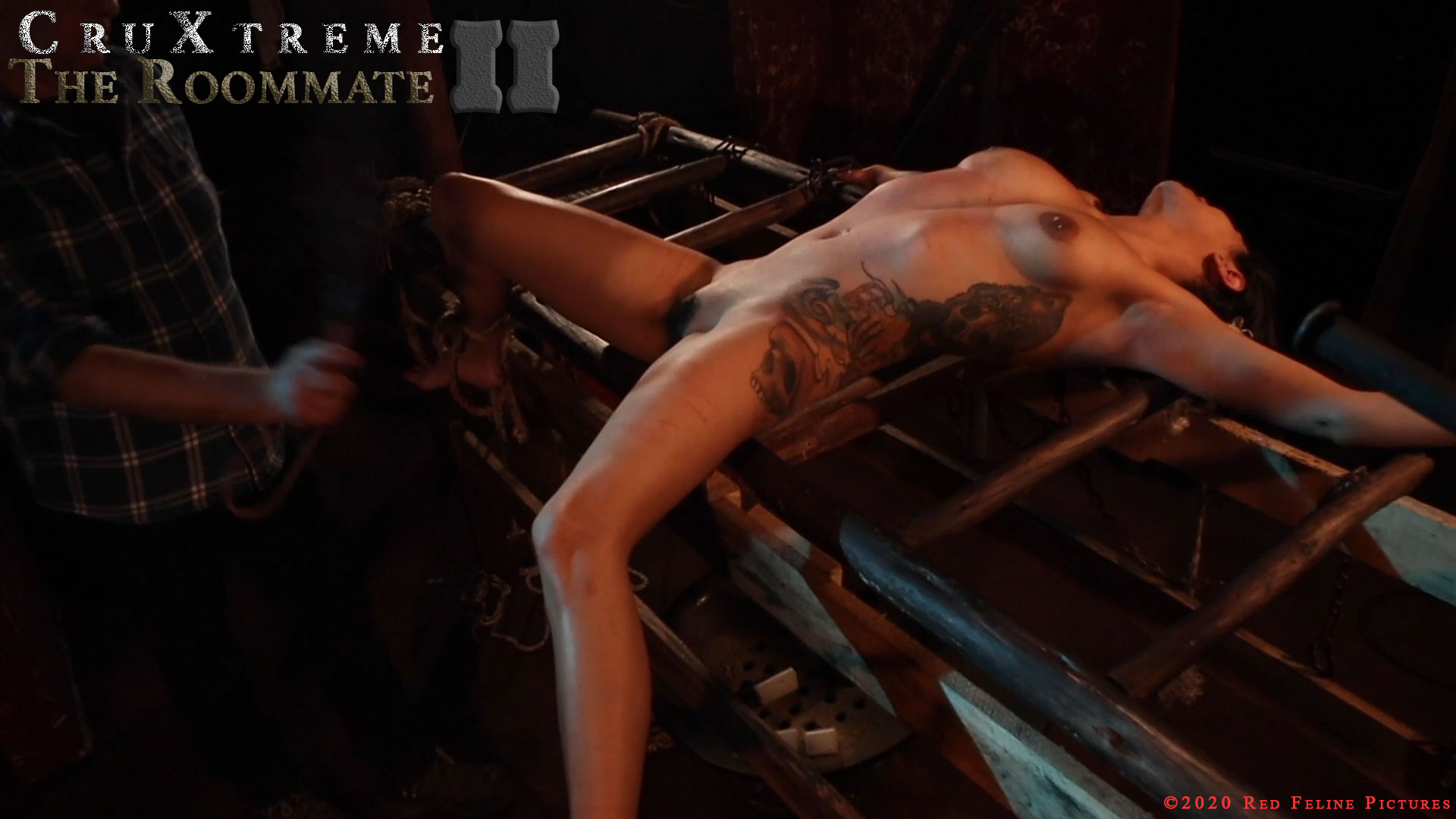 And now, more from the first official review of CruXtreme I - The Playroom
https://3hattergrindhouse.com/2020/09/03/more-performance-than-plot/

Three is a Risk

As we’ve mentioned above, there are at least two more films in the works on this theme: CruXtreme II and III. They are also the joint efforts of Jac and Dani.
According to Jac, Dani loved working on the series despite the horrors she apparently endures.
“She commented to me, recently, that she’s having a lot of fun,” he said.
It’s clear that her enthusiasm for the “victim” role is genuine.
“When I told her that we were almost done with the third one, she said that she has mixed feelings. She wants to finish it because she wants to move on to the next movie, while she doesn’t want to finish it because she’s enjoying it too much.”
Though they will wrap up the third installment soon, the pandemic is playing havoc with their schedule, as might be expected. Jac emphasized that they are faced with a one-week lock down in LaPaz. As a result, they’ll be forced to take that week off.
“If we’re done with CX III, we’ll move on to work on a couple of films with Mila [Joya] where Dani will also play a part,” he added. 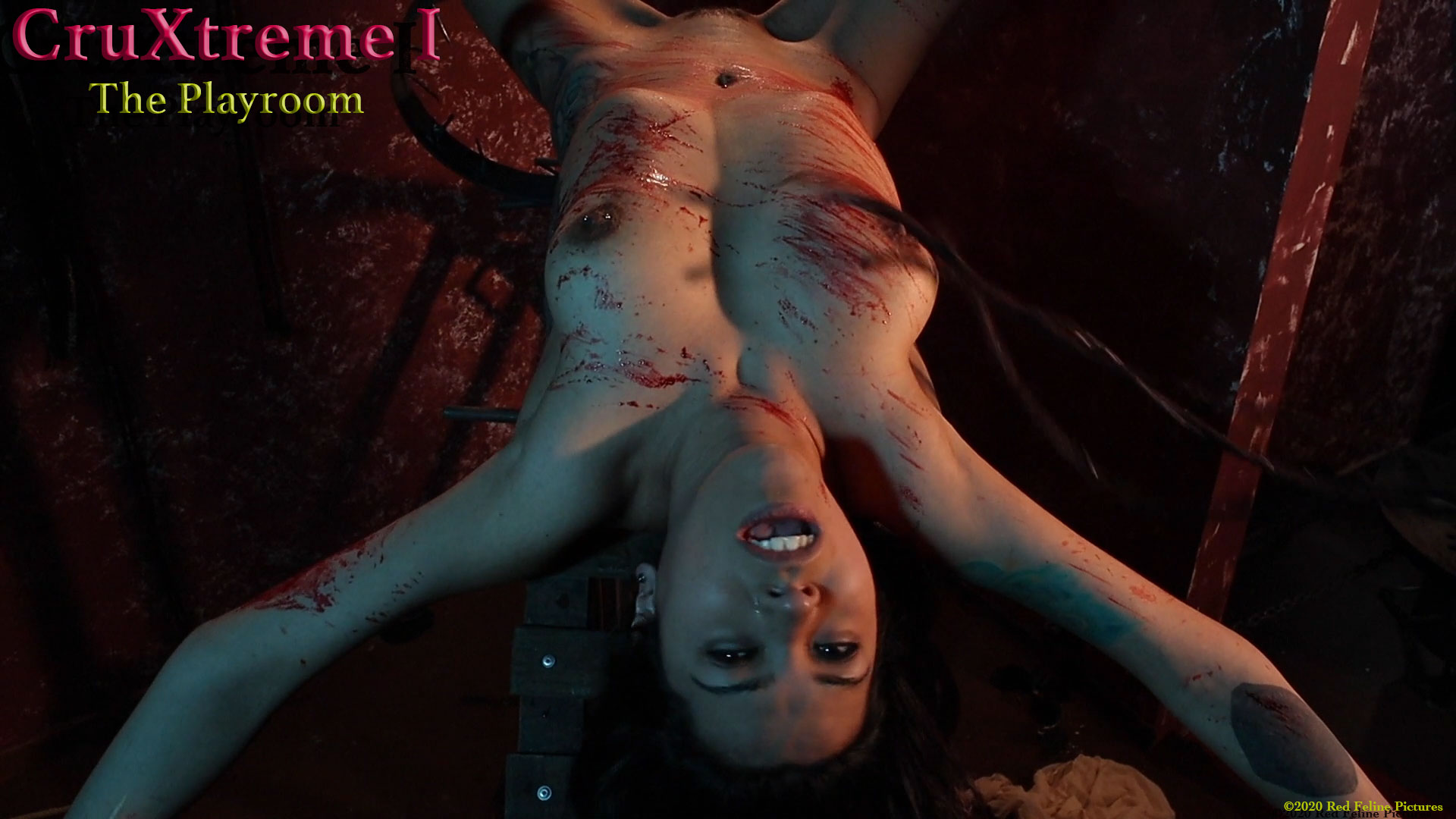 This past week, Jac was searching for something in the internet, when he was pleasantly surprised when he found a new, never seen before, review of his masterpiece Justine!
http://atthemansionofmadness.blogspot.com/2020/01/justine-2016.html

The great review is written by Giovanni Susina and it appears in the blog At the Mansion of Madness
http://atthemansionofmadness.blogspot.com/2020/01/justine-2016.html

The review covers, as background, the many films adapted from the most famous De Sade story. It's a nice, lengthy review, here I quote a tiny bit:

I found Avila’s Justine to be a worthwhile experience filled with disturbing violent imagery that also in its own way manages to be beautiful, particularly in the way it is framed and filmed by cinematographer Miguel Inti Canedo and edited by Avila. Plus, it is nice to have a modern Justine film to round out the collection of available Justine films, which are mostly from the ‘60s and ‘70s. 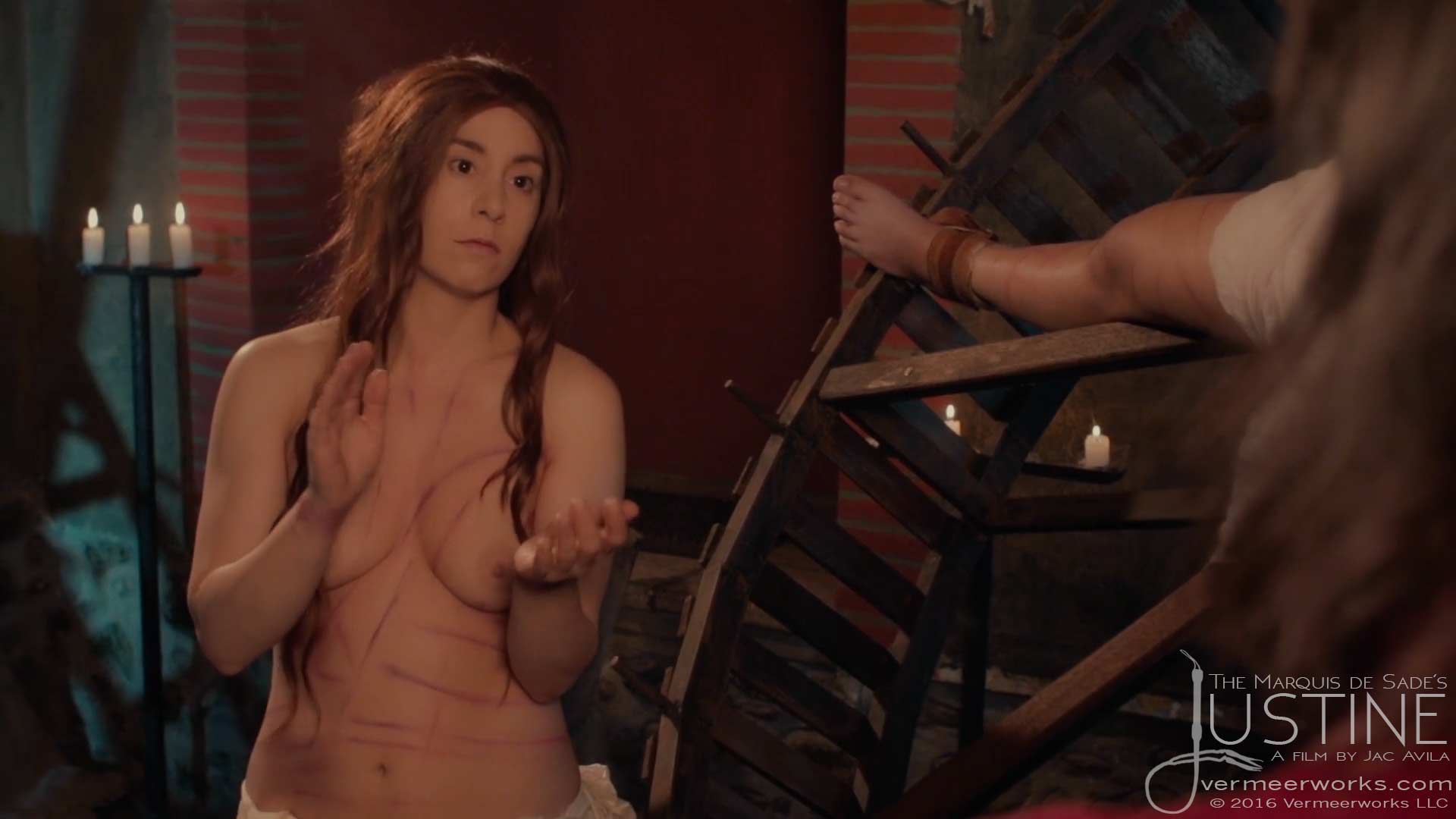 I will have a lot more soon, with news about The Training of Camille movies, more of the CruXtreme Series as well as the ongoing production madness that has taken over the Red Feline Pictures Cast and Crew.